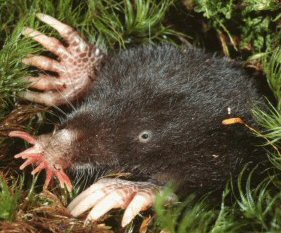 These species are very beautiful with outstanding abilities and qualities. Despite being apparently blind these moles have a star-shaped nose that actually helps them to sense things. They are among the only living species in the Condylura family.

We present a few lovely pictures of the start nosed mole:

These species are originally from the northeastern parts of the US & Eastern Canada. In addition to this, they are also found in the Minnesota, Labrador, Qubec etc. Moreover, they also inhabit in the regions of Appalachian Mountain and on the Atlantic Coast extending up to the Southeastern Georgia.

These species like to have small insects & fishes. At other times, they can also go for ants, beetle snails, and mollusks for their diet.

These species like to inhabit in the wet areas. One can also spot them in wet meadows, lakes, streams and banks. These moles create tunnels underneath the water.

Star nosed mole usually mate in the middle of March and April. The females reproduce only once a year. However, the females may also reproduce for the second time at an unsuccessful first time. Each litter contains 2 to 7 babies.

At birth, these species have ears, closed eyes and folded tentacles. Their organs usually become active only after 2 weeks of birth. The juvenile gets independent after one month from their birth. It usually takes about 10 months for the offspring to become matured.

Important Facts about Nose in the Life of Star Nosed Mole

These species are said to live for about 3 to 4 years.

According to the reports of IUCN, these species are in the category of the less important in the endangered list.