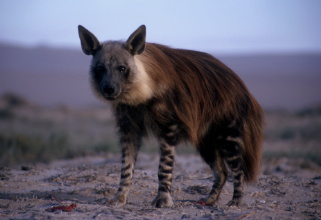 The Brown Hyena is commonly found in the regions of South Africa and surrounding countries. These species are sparingly found these days and pose the danger of extinction. As compared to other common hyenas, brown hyenas have somewhat of a shaggy look.

Some Interesting Facts about Brown Hyena

Brown Hyenas have typical behavioral traits and a few of them have been detailed here:

These species are actually found in the southeastern & southern parts of Africa including countries of Namibia, Southern and Western regions of South Africa, Botswana, Zimbabwe and Mozambique.

Height of Brown Hyenas: The height of their shoulder varies from 71 cm to 88 cm.

Color of Brown Hyenas: The fur of their body is dark brown while the color of their head is grey. Moreover, the grey colored legs have horizontal stripes on it.

Body of Brown Hyenas: In case of these species the neck and the back portion is wrapped around with long fur while the tail and back have rather shaggy fur.

Head of Brown Hyenas: The striped hyenas have a large skull.

Teeth of Brown Hyenas: The teeth of these species are strong. However, the power of jaws diminishes as the teeth get delicate with age.

We catch up with certain behavioral features of these species

The species like to have carcasses in their diet. They also prefer rodents, insects, fruits and small mammals. They can also be found thriving on cheetahs, black-backed jackals and the leopards.

These species live in the arid areas of the scrublands, savannahs, semi desert regions of the southern Africa and grasslands. The range of their territory is restricted within 233 – 466 sq. miles.

These species do not stick to any particular season for mating rather they can mate all the year round.

Animals like the lions are generally found preying on these species. The bigger ones thrive on the smaller Brown Hyena babies. One of the dangerous predators of these species is the African Wild dogs.

We elaborate here the adaptive features of the beautiful species that help them to survive in the wild:

According to the reports of IUCN these species are in the category of the threatened. The overall population of these species has reduced to 10,000. The main cause for their falling numbers is over hunting and the habitat loss. Now legal fortifications are being given to these species.