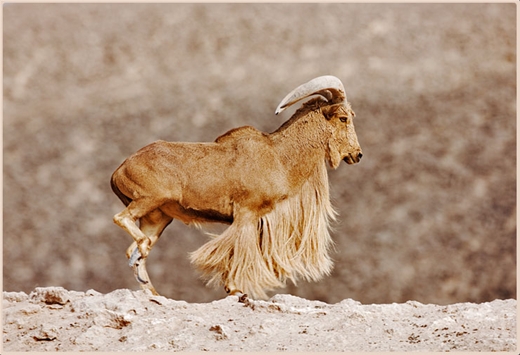 These species originally belong to the regions of North America. Also identified as aoudad, a name native to the barbers in North Africa, these sheep belong to the family of Bovidae. These mammals are very lively by nature and look like wild goats.

Some Interesting Facts about Barbary sheep

These species cling to the North African areas but can also be spotted in areas of Tunisia, Algeria, Egypt, Niger, Libya and Morocco. These can also me found sparingly in Spain. Following the danger to their existence, the density of these species seems to be somewhat increasing through legal fortifications. They are also found spreading in the Central and Northern parts of the Canara Island.

Some peculiar behavioral features of Barbary sheep are:

These species are herbivorous by nature. Overall items in their food habits contain seventy nine species of plant. It is said that out of these, thirteen are grass, twenty are shrubs and rest are forbes.They like the one leafy food that are ample in water. They also like to have flowers, leaves and fruits.

These species like to dwell on the mountain areas where they get enough grasses, bushes and lichens to graze. These species get moisture from the woods and grass.

The Barbary sheep do not have a specific mating season but they usually mate in September and continue up to November.

The known sub-species of the sheep are:

The average life span of the sheep is 20 years.

According to the reports of IUCN they are in the category of threatened for extinction. The density is safe only in fortified Southern Algeria in their national parks.