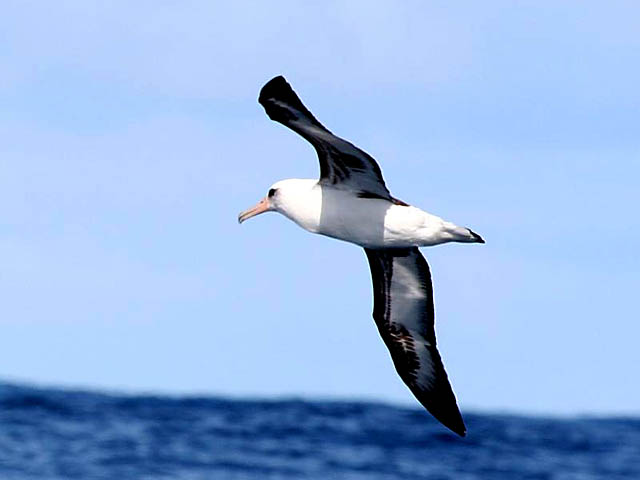 The Laysan Albatross are breathtaking beauties found mostly in Hawaii. One of the famous British Zoologist named Lionel Walter Rothschild illustrated these species as Diomedia Immutabilis (1983). They are known to be the single specimen inhabiting the Laysan Island, hence their name.

Some Interesting Facts about Laysan Albatross

Laysan albatross mostly inhabit parts of North Pacific and Hawaiian Islands, the Laysan and Midway Islands. They are also found in the Gaudalope Island situated in the western coast of México and the regions of the Aleutian Islands, French Frigate shoals, Revillagigedo Archipelago and the Bonin islands. During the mating season, they tend to relocate to the Bering Sea or Japan.

These species like to have crustaceans, cephalopods, fishes, squids and eggs (especially of the flying fish). They tend to have their food at night and mostly on the ground.

This albatross lets out a loud sound that has a variety of tunes including whistles and quacks.

In the sky, these birds tend to travel for long distances in a gliding movement. The laysan albatross might fly high in the air or might dive downwards elegantly. They divert their direction just by bending their tails or their head. It is said that these birds can go on for few days without rolling their wings.

These species usually dwell in open water areas but move to islands during the time of mating.

These species can withstand the drastic winds from the North Pacific. They also sleep soundly when they fly. This helps them to locate residence on the ground during the night time, when they are awake, and also be aware of the predators at the same time.

The breeding season of these species start from November and extends up to July. By nature, they tend to be colonial and prefer to build nests in small islands and atolls. Huge clans are often found making nests in the same location. The nests size varies according to the surrounding ones. It might be a small hole in the sand or something wrapped up in vegetation. In some cases, hybridization also occurs between the Laysan albatross and Black Footed albatross.

These species mate annually while some others might miss one or two years. These species do not breed unless and until they reach 7-8 years. During this period, they endeavor to get a partner. The juvenile ones get back to their colony within a span of 3-5 years. By nature, they are monogamous.

In order to attract their partners they do indulge in about 25 types dancing styles. The dance between males and females begin by clapping of beaks. In some cases, they dance by raising their heads pointing high towards the sky. It is seen many of them dance together close to each other. At times, they might also get homosexual partners. Such incidence of female mating has been spotted at the Hawaiian Islands of Oahu. The sex ratio comprising males out of females is 2-3. The females who are left unpaired tend to form pair and mate. Male pairs also take care of the eggs.

These species lay a single egg at a time. However, if it is infertile or gets ruined the female counterpart would not lay any eggs for that specific year. The laysan albatross egg is white dotted with spots. The females cover the eggs for 65 days while the male would take over for 2-3 weeks. Once they hatch the parents head out to the sea in order to gather food for the younger one. Usually both father and mother feed the baby.  The young albatross take 160 days to fly.

The Layson Albatross live for about 40- 60 years.

According to the reports of IUCN the albatross are in the list of endangered. Their population has reduced due to slaughtering and predation. Long line fishing should be forbidden by laws to save these species. Infact each year lots of younger one are facing death because they sometimes eat toothbrush and caps of the bottles dumped in water.