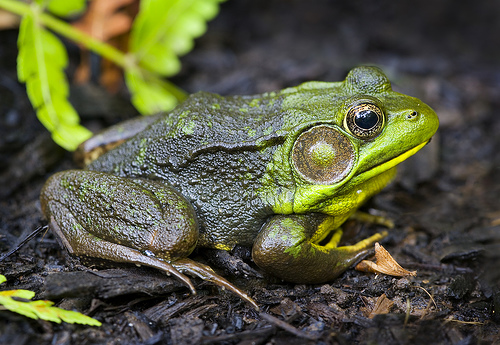 The Green Frog stands out amongst the most varieties of frogs primarily because of its enormous size. The frog, abundant in the US and Canada has two popular sub-species, namely, the Northern Green Frog and Bronze Frog.

Some Interesting Things about Green Frog

The call is given by the male frog and it is characteristically quite sharp and loud. It simply produces a single tone when intending to protect its kingdom.

Habitat and Distribution of Green Frog

The green frog usually dwells in the eastern parts of USA and Canada where they are mainly concentrated in the southeastern part of Manitoba.

Geographically, these species mainly thrive on fresh water ponds, lakes, roadside ditches, and swamps. This is because they quickly jump into water when they sense danger.

The green frogs have invertebrates, shrimps, spiders, tadpoles and smaller snakes. The smaller ones generally feed on water plants and algae.

The prime time for their mating starts from April and runs up to August. They usually like to mate in permanent or semi-permanent water bodies. The males let out a call aloud to attract females from various kingdoms. They do not clutter up like other frogs.

While breeding the males grab the females from back with the help of the fore limbs. Then the male produces the sperm that flows into the egg. This results in the fertilization process.

The females lay about 4000 eggs in water especially at places where there is underwater vegetation. The tadpoles have olive green bodies but are creamy white at the lower portions. Within a period of one year, they transform into froglets. The females attain sexual maturity within 2 to 3 years while the males attain by the age of one.

The adults like to stay withiin water while the younger ones wander over lands. They mostly prefer to thrive on soil and wet grass. Green frogs mostly remain active during the time of day and produce their typical sounds during the nights.

Green frogs become easy pets. However, one needs to follow some rules while housing them for proper care:

It is not considered to be threatened and is not in the red list published by the IUCN.