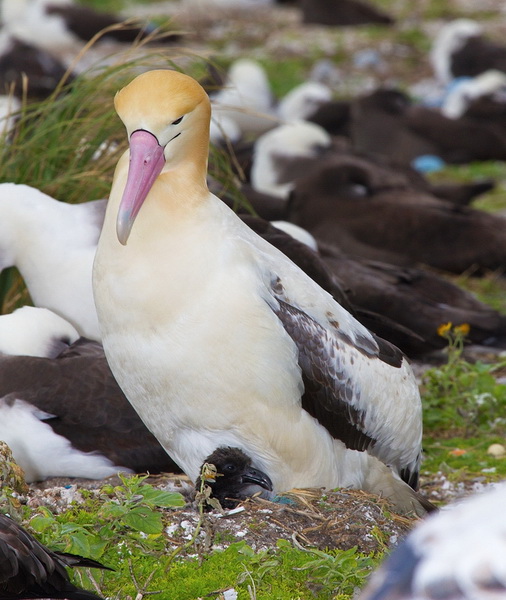 The short tailed albatross or the Stellar Albatross are mainly seabirds belonging to the region of North Pacific Ocean. Their attitude and appearance is quite similar to that of the South Ocean Albatross. Today these species are in the endangered list due to the hunting for feather trade. However, adequate fortification is given to save them.

Short tailed albatross’s can mostly be spotted in North Pacific Oceans of Taiwan and Japan. Recently they have been found dwelling in Minami –kojima and Torishima in the islands of Senkaku in Japan. In addition to this they are also popular in regions of China, Eastern Russia, Alaska, South Korea, and northwestern parts of Hawaiian Islands.

These species generally feed on squids, crustaceans, floating eggs of fishes and shrimps.

These species prefer to dwell on the open seas. They are mostly found making homes on the naked ground where the land is at a medium height or has cliffs.

The main predators of these species are Tiger Sharks and Whales.

The albatross has long narrow wings that help them fly swiftly and for greater distances.

These species prefer to mate in mid-October. The mating process begins when they attain the age of 7-8 years despite getting sexually mature by the age of 4.

The birds use grass and leaves to build nests in which the females usually lay a single egg during one mating season. Both males & females sit on the egg alternatively and quest for food during the periods of incubation that lasts for 65 days.

The offspring are usually born during January & February after which both parents nurse the younger ones. They begin to fly only when they are 4-5 months old. Once they learn flying, they quit their parents.

The birds generally flock to every year to the nesting places. These species stay on islands until the younger ones mature. After this, they get back to the ocean and stays there for the next mating season. However, the juvenile ones do not get back to lands until they are 5-6 years old.

These species can actually live for 20-45 years.

According to the reports of IUCN these species are in the list of endangered. They are foraged for their feathers. Various countries have tried to protect them by some implementation of rules.