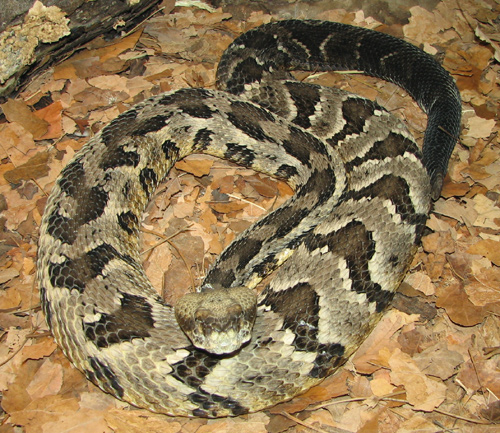 Timber Rattlesnake, also known as the canebrake rattlesnakes are a unique variety of snakes that despite being poisonous do not really attack their predators. An offspring of the species of the venomous pitviper, the rattlesnake is commonly found in United States of America. However, these snakes should not be misinterpreted to be the timid ones, when attacked; these snakes can raise a strong fight against their predators as well as the human beings

A few selected pictures of Timber Rattlesnake are attached below:

Some Exciting Facts about Timber Rattlesnake

Length of Timber Rattlesnake: This is amongst the largest snakes found In the USA. The length of these species varies from 91 to 137 cm.

Weight of Timber Rattlesnake: The snakes’ weight depends completely upon their diet. They more they eat, the greater becomes their weight. These snakes are therefore heavier in areas where food is found in abundance.

Color of Timber Rattlesnake: The timber rattlesnakes are usually found in two colors during their life span. Initially they are found in light yellow or grey color, which is called the light stage. In this situation, the background is decorated with v shaped black or dark brown color bands.

The next stage is the dark stage where the yellow portion is decorated with thick black or dark brown bands that go across.

Head of Timber Rattlesnake: These species consists of a triangular shaped head that is broad and flat.

Eyes of Timber Rattlesnake: Like all other poisonous snakes, the eye of timber rattlesnake comprises of the vertical incision.

Tail of Timber Rattlesnake: The tail of timber rattlesnake is black in color.

Skin of Timber Rattlesnake: The skin appears to be too rough due to the presence of scales.

Sensory Organ of Timber Rattlesnake: These species have sensory openings, sensitive to temperature on either sides of their face.

Rattle of Timber Rattlesnake: One of the unique characteristics of this snake is the rattle. The rattle consist of hornlike sections that are attached in a loose way.

These species inhabit the eastern parts of the USA extending from South Minnesota, South New Hampshire to East of Texas and northern Florida. They also dwell in certain parts of the South Ontario and Canada.

The Timber rattlesnake likes to have mammals like rabbits, chipmunks, moles, mice and weasels in their diet. These mammals comprise the main portion of their regular foods. This does not mean they do not feed on other mammal. They also like to have reptiles, birds and amphibians as well.

One can easily catch a glimpse of these snakes on the rough terrain of the deciduous forests. The males & females like thick woodlands. They also like to have hot & humid temperatures. The pregnant females prefer to rest on the bare rocky ridges where the temperature i9s very high. The pregnant females are called basking knolls. As they like to bask in the scorching heat of the summers prior giving birth.

In case of males, sexual maturity is attained at the age of 4, while the females are sexually matured by the age of 7 to 11.The best time for this breeding is between July and August. The males fight against each other to win the heart of the female counterparts. The females can restore the fertilization of their ova for about 9 months. The males have a good capacity to store the sperms for several months.

The female snakes usually involve in reproduction once in every 3 – 4 years. Over all they give birth to 6 – 14 juveniles during their lifetime. When born, the younger ones are wrapped in a thin membrane and they are a maximum of 8 to 10 inches in size.  In addition to this, the younger ones have active fangs and poisonous glands.

At this stage, females abstain from having food. However, she needs to be perfectly okay to meet all kinds of need of the younger ones growing in her womb. Therefore, the female snake needs to maintain adequate body temperature.

The human beings find it very easy to capture the female snakes during the period of pregnancy. In this situation, they are easily trapped in the loop.

These species can live up to 20 years of age.

Human beings comprise as the principal predators of timber rattlesnakes. Others in the list include:

If any human being suffers a bite from the rattlesnake, the person should remain serene and quiet .It is necessary on the part of the victim to consult the doctor at the earliest. In such a situation, if a person gets too hyperactive, then the heartbeat accelerates. This results in a fair chance for the poison to disseminate in the whole body through increased circulation.

In the last few years, these species have entered the list of those threatened. Human beings and their habitat are devastating their lives.