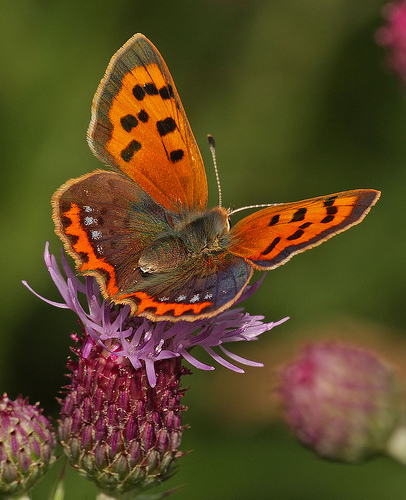 These species belong to the family of gossamer winged family. The butterflies are very beautiful and are mostly petted for enhancement of the charm of gardens. These invertebrates tend to be very active and lively and often attract attention as a flick of orange in mid-air.

We have some beautiful pictures of these butterflies.

These species are majorly found in Europe, North America and Asia. Other popular locations include southern parts North America in Ethiopia, England, Scotland, Ireland and south and central regions of Wales. They can also be spotted in Canada, Rockies and Northern Alaska.

The physical appearance of the butterfly varies largely in two different stages of their lifecycle and we elaborate on both of them below.

The caterpillars prefer herbs of buckwheat such as sheep sorrel, mountain sorrel, and curly dock in their diet. The juveniles also feed on leaves through holes from below them. As they reach the adult stage, they prefer to suck nectar from flowers including buttercup, yarrow, oxy-eye-daisy, white cover etc.

These beautiful species can be seen in the churchyard clearings, pastures, forest clearings, fields and uncultivated lands dotted with scrublands. It is striking but these butterflies are sometimes found flying on the city wastes as well.

The flight of the butterfly varies at various locations of their habitat. In the Alpine & Arctic region, they seem to have only one flight from July to September. The butterflies in the north have a flight about twice during August to September. Some might also fly thrice a month during April to September.

These species usually live for few days. It is seen that their average span of life is hardly 2 weeks.

These species are secured and are not listed on the category of endangered species.