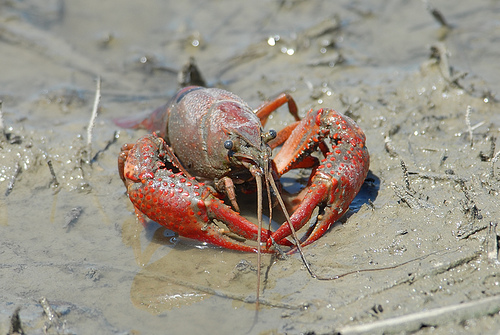 The Procambarus clarkii, or the Red Swamp Crayfish, are, like most crayfishes, a freshwater crayfish. Their existence seems to have originated from the parts of Northern America. Their body strength can be acknowledged from the fact that they can survive even at very high water currents. Another unique characteristic of the Procambarus clarkia crayfish is that they burrow a lot. We explore more about this crayfish in this article dedicated to the beautiful aquatic species.

A selection of pictures of the Procambarus Clarkii has been presented below.

Some Interesting Facts about Procambarus Clarkii

One can spot these species in the south central portion of USA and parts of México. They are also known to dwell in the parts of Albama, Texas, Illinois and Tennessee.

These species are carnivorous by nature and feed on tadpoles, snails and larvae. They sometimes also thrive on dead animals and worms.

These species like to dwell in streams, canals, swamps, slow moving rivers, and marshes.

They usually inhabit in warm and shallow areas. However these species can withstand extremes conditions of temperature, less oxygen, salinity and pollution. If is too cold or drought these species stays inside the burrows.

In order to pet these species one should remember a few key points:

These species can actually live up to 3 – 5 years.

The lives of these species are facing continuous threat from ants. However, according to the reports of IUCN, they are in the category of least important.