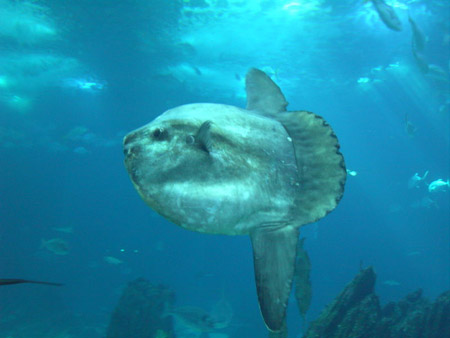 The Ocean sunfish come to humans as peculiar looking species. The sunfish are possibly the heaviest and the largest of bony fish. These species are not used for commercial trade but however are in huge demand for live oil and meat.

Take a look at the beautiful pictures of these species.

Some Interesting Facts about Ocean Sunfish

We detail a few more unique and noteworthy facts about these fishes:

Ocean sunfish can be popularly found in the temperate and the tropical parts of the world except colder regions exclusive of parts of British Columbia and Alaska. They are more noticeable in the southern regions barring Antarctica. They are also found in certain parts of Arabian Sea and Mediterranean Sea.

Weight of Ocean Sunfish: The weight of these species is generally 100 kg but can vary up to 2000 pounds.

Body of Ocean Sunfish: The sunfish are mostly round with a flattish body covered with a leathery, thin skin without much scales

Color of Ocean Sunfish: These fishes can be found in varied colors like olive brown, grey, and black with tinge of silver. They are often found dotted with spots.

These species mostly remain active during nighttime. They like to feed on various types of aquatic creatures like the jellyfish, fish larvae, algae, crustaceans, salps, squids, plankton and other likes.

The main predators of these species are the majorly large fishes including white sharks, large sharks, killer whales and sea lions. The juvenile ones are usually preyed by fishes like Mahi Mahi and Bluefin Tuna.

The mating season of these species is not clearly known to mankind. They are usually found mating in the tropical and sub tropical waters of the ocean.

The female counterparts usually lay huge number of eggs that may count about 3 million at times. These eggs are externally fertilized. The larva of these species looks like a small fish and they develop long pectoral shaped fins. It is only during nighttime that they come out on the surface of the ocean while in the day time they tend to stay in the depths of the ocean.

The average life span of these species is not yet known. However if tamed they can live for 8 – 10 years.

In the category of finned fish, these species are in the list of less important ones in the endangered list. The IUCN has not yet rated it.