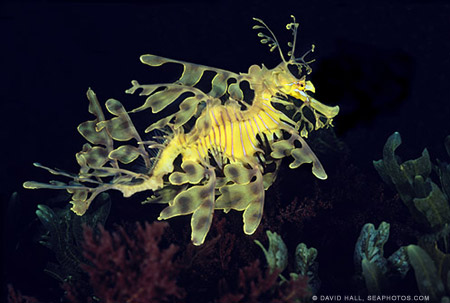 These species belong to the originally to the Sygnathidae family. Their name resembles the leafy structures that are present profusely over their body. They are also referred to as the Glauerts seadragon. They are also regarded as the member of Phycodurus genus. One can spot these species in the coastal areas of the South Western parts of Australlia.

We present some beautiful pictures of leafy seadragons:

Some Interesting Facts about Leafy Seadragon

Here is a glimpse of some of the interesting facts about these species:

The Leafy Seadragon can be found in the Southern and Western coast of Australia.

The Leafy Seadragon generally uses its long snout and small mouth to get hold of the victim. These generally like to have mysid shrimps, zooplanktons, panaied shrimps, larval fish, amphibians and sea lice in their diet.

These species like to dwell on meadows, rocky reef, seagrass, seaweed and sand patches primarily in Australia.

These species actually move with the help of the pectoral, dorsal fins .The external skin is very fixed and is less mobile, and flexible. These species can stay in one place for long duration. These species are known to move very fast and sometimes even at a speed of 150 km per hour.

The main predators of the juvenile sea horses are giant crustaceans, fishes and anemones. The older ones do not really have any enemies.

We take a tour of the adaptive features of these species:

The mating season of these species ranges between August to March.

While petting leafy seadragon, one needs to be extremely careful in handling of the sea horses. These species are very fragile; therefore, it is difficult to retrieve and keep them away from their wild environment. One should make sure to maintain a proper water pressure and a good supply of food. Crustacean diet should make them happy. These species like to stay isolated hence it is better to keep them away from other species.

The original life span is not yet known. However, these species are believed to live for about two years in their natural environment.

According to the reports of IUCN they are listed in the category of near endangered.