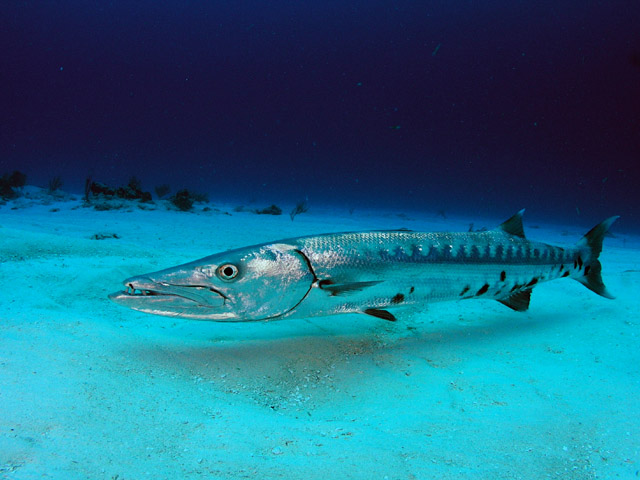 The great barracuda belong to the family of Sphyraenidae which in Latin terms means pike like. They have an elongated body with a gigantic mouth coupled with uneven teeth & strong jaws. They are also known as “Tiger of the Sea”. These species are also popular in the world of gaming.

Some Interesting Facts about Great Barracuda

These species are commonly found in the parts of Caribbean, Mediterranean, tropical waters and Western Atlantic. One could also spot them in the parts of Malaysia, Indonesia and Fiji and the Indian Ocean. Infact one can also find them along Western Atlantic including Massachusetts, Bermuda and somewhere near Brazil. In the North Western parts, it ranges from the Sierra Leone to the St Pauls Rocks. In the regions of Indo Pacific, they tend to cover the Eastern Africa to Hawaii and the Red Sea.

These species are carnivorous by nature. They always prefer to eat small fishes, grunts, bream, snupper, mullets. They are even cannibalistic because they also thrive on juvenile ones.

One can spot these species in the sub tropical and tropical areas of the water. This may include shallow waters, coral heads, reefs, open seas, coastal lagoons and mangroves.

During foraging, they tend to move their sleek body through the reefs. These species have dorsal fins that make it a swift swimmer. Their powerful jaws and conical shaped teeth also act as great defensive tools. They also have the skill to inflate & deflate their bodies. In fact this also helps them to rise up or move down in the sea.

The fish is largely consumed by human beings. The nutritional details of one ounce of fish (boneless) have been presented below:

These species are recognized as game fishes instead of the commercial variety. The bigger fishes should be avoided in human consumption as they generally accumulate the ciguatera toxin responsible for ciguatera poisoning within their bodies. People affected by the same generally suffer from gastrointestinal and heart troubles.

The fish has been mistakenly taken by many as a threat to human beings primarily because of its threatening appearance. One can avoid attacks by these fishes by simply not carrying any knife or other such shiny article that can be misunderstood as a fish by the great barracuda.

These species mate during the months of April to September. Male get mature sexually at the age of 3 years while the female counterparts gets matured at the age of 4 years.

These species tend to settle down on the areas with a lot of marine vegetation is available and prefer locations that allow fortification and food. Initially they start to stay in the shallow estuaries. Once they attain maturity they move into deeper seas.

These species live for about 14 years.

The populations of these species are very stable. They are not in the category of threatened. Initially they were consumed for meat. However now they are not taken because of health problems like headaches, muscle pain, blood pressure etc.