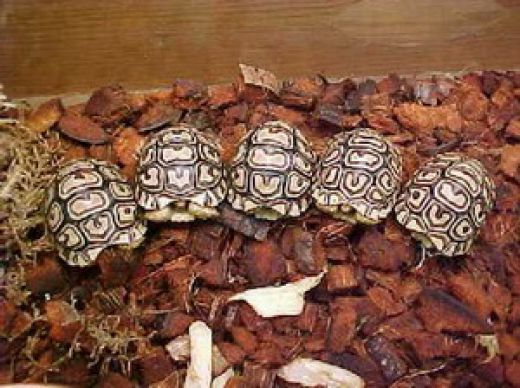 Here are some awesome pictures of Leopard tortoise:

Some Exciting Facts about Leopard Tortoise

Size of Leopard Tortoise: As these species become adults they attain the average size of 18 inches. Their weight is measured about 18 kilograms. It is also seen that the carapace of an adult tortoise attains an average size of 24 inches. The magnificent tortoise can become as large as 39 inches.

Shell of Leopard Tortoise: The external shell is dome shaped. It is decorated with pyramidal covering that is outstandingly appealing to the eyes. Every tortoise reflects some attractive pattern.

Color of Leopard Tortoise: The original color of the carapace is an appealing pale yellow or cream. Moreover, it is garnished with black colored spots, blotches.

These species inhabit the regions of Africa spanning from Sudan to Southern Cape.

The leopard tortoise like to feed on flowers, weeds and grasses. One most interesting thing is that they do not require much water rather they extract it from the food itself.

The leopard tortoise inhabits the regions of the Savannah, which is dotted with scarce vegetation. They are also found in bushy areas that help them to escape the extreme heat of the sun. There are, some who prefer to dwell in place with a lot of rain. One can also spot them in the holes of foxes, jackals in order to defend from the harsh weather conditions.

These species start mating on attainment of age between 12 – 15 years of age. At the time of mating the male counterparts emit an uttering sound. Once the course of mating gets over, the females begin to lay their eggs. In each clutter there are about 5 to 18 eggs.

These species attain maturity at a very early age probably by 6 years of age. However, the development of the South African tortoise in terms of numbers is tough.

These species can live for about 100 years.

It is a lifelong desire of people all over the world to pet these species. But for proper care of these sweet creatures, one needs to follow these requisites to pet them:

Proper Feeding: These species are herbivore. They especially feed on green grass that is devoid of pesticides but enriched in fiber. The grasses should be like orchard grass or timothy. One should also feed them with proper vegetables. However, one should make sure not to give them vegetables like spinach and beet as they contain high oxalate.

Necessary Supplements: For the betterment of their health, it is good to supplement these species with vitamin D3 and calcium on a regular basis.

Outdoor Housing: For outdoor housing, the temperature range between 27 or 32 celsius.These species cannot survive well in cooler temperatures. One should endeavor to keep these species in a fortified area away from their predators. There should be adequate water and pretending area, which would make them feel homely.

These species are not threatened. However, it is better not to smuggle them as this is prohibited by laws.