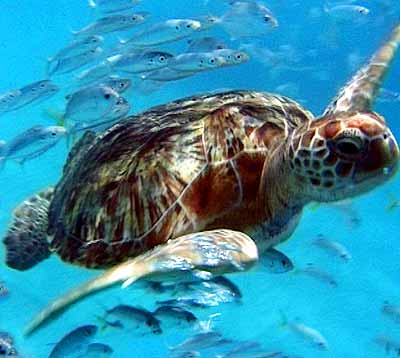 Check out some incredible pictures of these species below:

Some Interesting Facts about Leatherback Turtle

These species inhabit the regions of Alaska and Norway in the north to British Isles in the south. They can also be found in the Sub tropical and Tropical oceans. In addition to this, one can also spot them in regions of Puerto Rico, Mexico, Virgin Islands, and Nova Scotia etc. Infact, they also dwell in parts of Madagascar and Malaysia.

Size of Leatherback Turtle: The size of these species starting from the beak and exending up to the tail generally ranges between 4 – 6 feet. Although the largest one found is 10 feet.

Weight of Leatherback Turtle: The weight of an adult turtle lies within 660 – 1100 pounds.

Shell of Leatherback Turtle: The shell consists of bony plates devoid of scales. Moreover, the shell and plastron do not have demarcated boundaries, rather they are clubbed together. As compared to other turtles, their shells are not so hard.

Color of Leatherback Turtle: The lower portion of the shell is found in pink, white, black or grey colors. The shell is black or dark grey in color dotted with white spots.

These species like to feed on jellyfishes. Quick Fact: they can consume 50 giant jellyfishes in a day!! They also prefer to thrive on sea squirts, pyrosomas, sea urchins, seaweeds, algae etc.

These species are pelagic. They do prefer to migrate from one place to another. They are quite active even at temperatures below 40 degree. One could also spot them in tropical areas and reefs. Their leathery shell helps them to maintain their body temperature. Thus, they can survive even when the oceanic temperature dips..

These species actually evolved in the cretaceous period thatdates back 110 million years ago . These are the only living members of the family of Dermochelydae.

Breeding And Nesting of Leatherback Turtle

These species become sexually matured between the ages of 6 – 12 years. The leatherback turtle males have concave shells that help them at the time of mating. These species like to mate in shallow waters. The females usually come out during the nighttime and select a preferable location free of vegetation, rocks to carry out the intercourse. Moreover, she creates a pit with the help of her flippers. The females usually lay 70 eggs out of which about 40 turn infertile on an average. Once the mating gets finished, she returns to the ocean. The females reproduce 7 times after every 9 days. The temperature determines the gender of the offsprings.The cooler temperature indicates males while the warmer indicate females.

Leatherback turtle expect to live for about 35 – 40 years.

Well these species travel far distances from their breeding and feeding regions. It is seen that they travel about 3700 miles approximately. Recent satellite data have revealed that these species found in Costa Rica also inhabit in parts of South Western pacific.

The lives of these species are threatened.

As mentioned earlier, these species are migratory; therefore there should not be any law of consumption adhering to a single nation. However, the preservation of these species should be carefully monitored and done in a specific way going by the international treaties and laws.